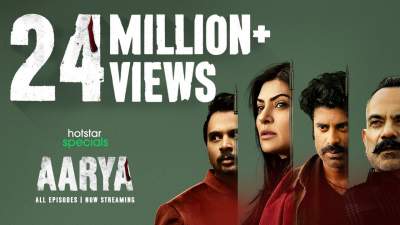 Suspended upside down from gymnastics rings in the opening shot, Sushmita Sen as Aarya, perfectly sets the tone for the nine-episode series. The enigmatic image, contrary to expectations, ushers us into a normal household, grappling with a familial morning routine. It’s a clever glimpse into the possibilities of Aarya shape-shifting into something more badass from a regular home-maker, and the underlying capability, focus and strength required, both in body and mind, to do so. The series rests heavily on Sen’s capabilities and conviction to slip into different avatars, while maintaining her credibility in all the roles — a grieving wife, scared mother, hurt friend, diplomatic daughter, drug dealer, businesswoman and keeper of secrets. Sen’s prowess to transition smoothly, while not giving away too much, is one of the biggest assets of the show.

Aarya is a genre series that’s not too ambitious. The show knows its limits and remains quite basic as a crime thriller, which works in its favour. The big reveals aren’t too shocking, but the emphasis is on how we, as an audience, reach the destination rather than the destination itself. The cliff hangers at the end of each episode — classic old-school television-style — serve their sole purpose of creating a desire to know more. In a genre film, with its time constraint, the narrative is often limited to what’s integral to the plot and the thriller. But with a lavish run-time of nine 50-minute episodes, Aarya can explore the finer relationship details and wallow in moments like the murder of Tej Sareen (Chandrachur Singh). For the most part, even though stretched a bit too much at times, the story remains on track, is simple (sometimes simplistic) to follow and leaves you with utmost curiosity at the end of each episode.