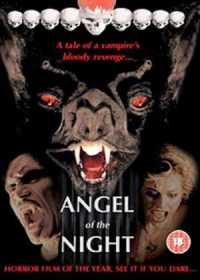 Rebecca has inherited her grandmother’s Gothic mansion and brings both her best friend an her boyfriend for a weekend. While exploring the crypts they discover an old dusty book, which describes the life of a vampire. As the story unfolds, it becomes apparent that the vampire was Rebecca’s great grandfather, Rico. Later that night Rebecca finds herself in a trance, reciting an occult ritual described in the book resulting in the opening of the coffin and the new life for Rico. The Angel of the Night is back.