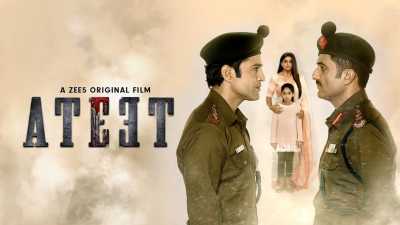 Not that his holiday lasts for long. Tanuj Bhramar’s film is a choppy, half-baked horror that builds up slow yet feels abruptly clipped. It opens with Colonel Vishwa Karma (Sanjay) in his alpine idyll, drinking whiskey and hosting a celebratory dinner. The ‘karma’ in Vishwa’s name suggests unfinished business — as well as the film’s knack for unsubtle nomenclature.

In no time, ‘Ateet’ (Rajeev Khandelwal) shows up. He’s Vishwa’s friend, presumed dead after a military ambush several years ago. But now Ateet is back — a literal blast from the past — and both parties look suitably shell-shocked, especially Rajeev, matching a Hagrid hairdo with keen Charles Manson eyes. It’s an impossibly awkward reunion (worthy of a ‘bro, we thought you died’ meme), though there’s another twist.

Ateet’s wife Janvi (Priyamani) and daughter Sanah (Deshna Dugad) are now living with Vishwa — a fact he struggles the most to make peace with. And so, like an old Tweet resurfacing years after the fact, he returns to haunt their lives, while the film slips into a loop of tired genre tricks.

Here, too, the mistakes are glaring. An early confrontation is interrupted by a Sonu Nigam ballad. Later, Yasser Desai’s voice hijacks the emotional run-up to a scene. The background score is minimal, while the silences don’t lead to worthy payoffs. Visually, the film is high on atmospherics, though it doesn’t take long for monotony to set in. There are dull grays, muted greens and swirls of unnecessary smoke effects. Vishwa’s survivor’s guilt is manifested in obvious ways: ghostly hands pushing out of the dirt, apparitions in the restroom…

Priyamani treads the genre mishmash with ease. She’s never aloof, yet looks attuned to the trashy superficiality of it all (Janvi’s first reaction on being told of Ateet’s return is an arch smile). In comparison, Sanjay and Rajeev are overly invested and uniformly dull. A nod, also, to actor Shakeel Khan, successfully playing the sidekick soldier since Lakshya (2004).

Much like Bhram, Ateet looks at PTSD and its lingering effects. It’s become a familiar jumping-off point for countless horror films, often at the expense of sufferers. “He wasn’t so weak to commit suicide,” a character stupidly asserts in this film. It’s the sort of writing that can throw off even a fully-engaged viewer.