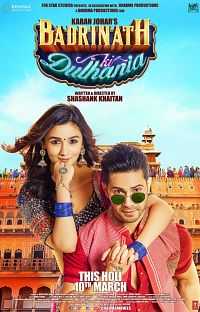 Badrinath Ki Dulhania marked the third collaboration between Dhawan and Bhatt following their previous films Student of the Year (2012) and Humpty Sharma Ki Dulhania (2014) both produced by Johar; the latter of which was also directed by Khaitan. It is the second installment in the Dulhania franchise. Principal photography began in May 2016 and it was filmed across Panvel, Singapore and Kota on a production budget of 270 million; 120 million were spent on the promotions, print and publicity costs of the film. Arijit Singh was among the singers signed for the film’s songs.

Badrinath Ki Dulhania was theatrically released in India on 10 March 2017, coinciding with the Holi weekend. The film became a financial success, earning over 1.90 billion worldwide at the box office. At the 63rd Filmfare Awards, it was nominated in eight categories including Best Film, Best Director for Khaitan, Best Actor for Dhawan and Best Actress for Bhatt; it won Best Male Playback Singer for Singh.