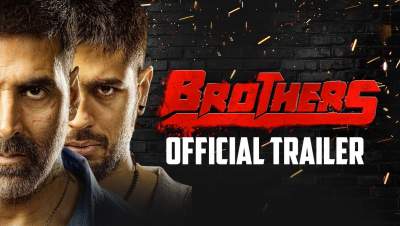 ‘Brothers’ uses a form of kinetic martial arts to foreground its story of two warring siblings, but it stays, at heart, a Karan Johar film : the crunching bones and spraying blood is as heavily underscored by we-are-family soppiness as it is with deafening background music. Result : a film that actually has a plot (officially adapted from Hollywood film ‘Warriors’, with shades of ‘Fight Club’ and ‘Rocky’ thrown in) riding on competent acts, but which squanders its advantages because of the treatment.

David (Akshay Kumar) and Monty (Sidharth Malhotra) are estranged brothers. A deep wound from their childhood festers strongly, and when they face each other in a ring, they go for the kill. Or do they?

Their backstory with a dissolute, drunk fighter for a father (Jackie Shroff) and large-hearted loving woman for a mother ( Shah) is effectively executed. So are the fight scenes. In fact, it must be the first time that there has been such extensive detailing of a high-tech arena, glittering with strobe-lights, lusty spectators, foreign fighters, excitable commentators ( Zutshi) in Bollywood. All of it—snarling fighters, hooded faces, uniformed assistants marching up the ramp to swelling beats–feels very WWF and Hollywood and expensively bankrolled reality TV, rolled into one.