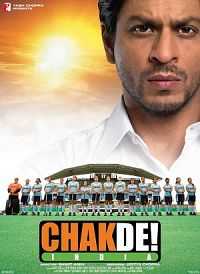 Chak De! India (English: Go For it! India or Go! India) is a 2007 Indian sports film, directed by Shimit Amin and Rob Miller (sports scenes), produced by Aditya Chopra, with music by Salim–Sulaiman and a screenplay by Jaideep Sahni. It explores religious bigotry, the legacy of the partition of India, ethnic and regional prejudice and sexism in contemporary India in a fictional story about the Indian women’s national field-hockey team which was inspired by the team’s win at the 2002 Commonwealth Games. The film stars Shahrukh Khan as Kabir Khan, former captain of the Indian men’s national field-hockey team. After a disastrous loss to Pakistan, Khan is ostracized from the sport and he and his mother are driven from the family home by angry neighbors. Seven years later, to redeem himself, Khan becomes the coach of the Indian national women’s hockey team and aims to turn its sixteen contentious players into a championship unit.