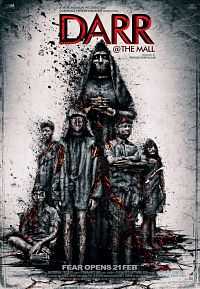 A new mall called Amity mall has opened up, owned by Mr Manchanda (Arif Zakaria) and Mr Khan (Asif Basra) who claim it to be Asia’s largest mall. The film starts off with a security guard talking to someone on phone but displays being paranoid. He looks towards a smokey apparation and begs it to let him go, but a chase ensues and he rapidly gets into his car, trying to escape but while going through the ramps of the basement, the car crashes and the man is eventually killed by an unknown force who strangled him using the seat belt.

A week later, Vishnu (Jimmy Shergill) goes to the mall to apply for the position of Head of security. Mr Khan interviews him but is interrupted by Tischa, the marketing director who says there’s something important he must attend to. Mr Khan joins the others(Mr Manchanda, Mr Saini and Tischa) in a meeting room where the tv shows a news reporter covering up on the death of the security guard. The mall is reputed as being haunted because of various deaths of construction workers and mall staff and hence people refrain from working there, but Mr Khan hires Vishnu after he agrees to work there despite the claims. Vishnu quickly changes into his uniform in the locker room where the locker of the previous guard(who was killed) mysteriously opens, where a file falls down.

On examining it, Vishnu finds photographs of camera footage from various areas of the mall all with the smokey apparation caught on camera. He catches someone spying on him and on confronting, it turns out to be a small girl whom he questions about her parents, but while he is distracted, the girl disappears. Vishnu seems perplexed but soon brushes it off and continues to the surveillance room along with his assistant, Rana. He does a quick search of the room and finds a some spilled jam which comes of as rather suspicious to him. He then sends Rana to check all cameras to make sure they’re working but while in the basement, the storage room door opens by itself and on being ordered by Vishnu, Rana checks it out, but is shortly killed by an unknown apparation.