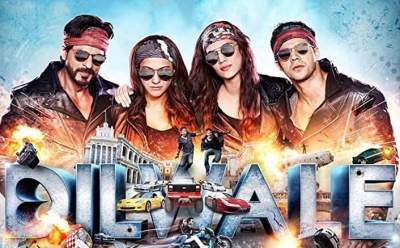 Dilwale review: In this rigmarole, Shah Rukh khan is the only thing worth watching when he switches on the wattage ( Kajol can shine, too, when she chooses to)

I had hopes from ‘Diwale’, essentially because I had enjoyed, for the most part, the previous Shah Rukh Khan-Rohit Shetty combine. ‘Chennai Express’ had a tweaked Rohit Shetty sensibility (we’ll take you to south India, and have characters yak away in Tamil minus translation, and if you don’t understand, too bad) and SRK’s ability to send himself up, and delivered some amount of fresh fun.

There’s nothing new in ‘Dilwale’, which steals moments not just from Rohit Shetty’s ‘Golmaal’ films, but also from Hollywood rom com ‘Love Actually’. Rohit Shetty is back in his favourite Goa, choosing to use sets which look like sets, done up in blindingly bright colours ( it’s almost as if the scenarist is scared to miss out a single hue in the palette). The film also takes a detour to Bulgaria (Why Bulgaria? Who cares?) for a most improbable back-story, involving the main lead pair, gangs, and guns and bullets, but gets back to its tiresome old haunts and habits soon enough. (Read Review of Deepika Padukone, Ranveer Singh’s ‘Bajirao Mastani’)