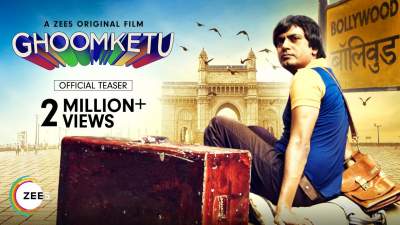 Can a film starring Nawazuddin Siddiqui as the main act be a drag? That’s the question that stared me in the face, literally, for the duration of Ghoomketu. And the answer is, yes, alack and alas.

Not that it’s Nawazuddin’s fault. For a film which revolves around a wannabe writer of Bollywood movies, he has been given the most banal, overused lines and situations. As Ghoomketu fetches up at a musty office to ask for a job, he is told, ‘kuch naya socho’. Wish the filmmakers had taken their own advice seriously.

The actors who revolve around Ghoomketu, including Yadav (father), Arun (aunt), Kirkire (uncle) struggle with the same problem. Except for a scene here or there, you can see them stuck in the same loop: the marvellous Yadav is made to yell at the top of his voice right through; Arun gets a burp-laden track which she tackles gamely, and is delightful withal, and Kirkire just pops up once in a while, to no avail. Everything is either hammered in or hammed up, with not one single subtle note anywhere in sight.

Some real-life stars show up as themselves in cameos, Amitabh Bachchan, Ranveer Singh, Sonakshi Sinha, presumably to add gloss. But it’s mostly such a trudge, this tale of a country bumpkin trying to find his muse in big, bad Mumbai. Occasionally, Nawaz, straggly hair dyed a dreadful shade of red (nice touch), and psychedelic shirts, breaks free, giving us a glimpse of what this film could have been. The only person who has fun, from beginning to end, is Kashyap, whose lazy, corrupt cop bumbles about and brightens up the proceedings. He really should act more.

‘Comedy likho, badi demand hai’, Ghoomketu is told. We really could do with some laughs in these grim times, and this film’s premise did hold out promise, but it turns out to be more clutch-your-head-ache, than hold-your-sides-laughter.