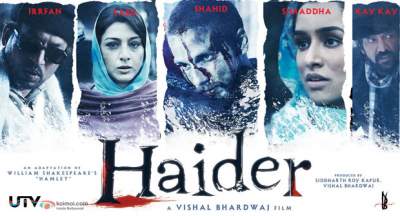 In 1995, during the insurgency in Kashmir, Hilaal Meer, a doctor based in Srinagar, agrees to perform an appendectomy on Ikhlaque, the leader of a pro-separatist militant group. To avoid detection, he performs the surgery at his house, much to the chagrin of his wife Ghazala, who questions his allegiance. The following day, during a military raid, Hilaal is accused of harboring terrorists. A shootout ensues at his home, during which Ikhlaque is killed and Hilaal is taken away for questioning. The doctor’s house is subsequently bombed to kill any other militants hiding inside.

Some time later, Ghazala’s son Haider returns from Aligarh Muslim University to seek answers about his father’s disappearance. Upon arrival, he is shocked to find his mother singing and laughing along with her brother-in-law, Khurram. Unable to understand his mother’s behavior, he begins searching for his father in various police stations and detention camps with the help of his childhood sweetheart Arshia Lone, a journalist.

Winter arrives in Kashmir. Saddened by the growing closeness between Ghazala and Khurram, and still unable to find any leads, Haider begins to lose hope. However, Arshia encounters a stranger, Roohdaar, who has Haider contact him to receive information regarding his missing father. Roohdaar, who is part of a Pakistani separatist group, explains that he and Hilaal were both imprisoned in a detention camp by a counterinsurgency militia formed by Khurram. The group had both Hilaal and Roohdaar executed, but Roohdaar survived and is meeting Haider to pass on Hilaal’s final wish: for Haider to take revenge on Khurram for his betrayal.