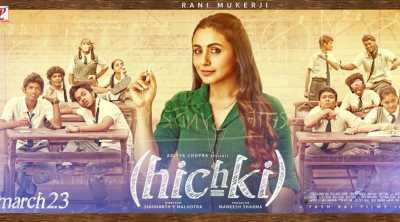 Hichki (transl. Hiccup) is a 2018 Indian Hindi drama film, directed by Sidharth P. Malhotra and produced by Maneesh Sharma under the banner Yash Raj Films. The movie is an Indian adaptation of Brad Cohen’s 2005 autobiography Front of the Class: How Tourette Syndrome Made Me the Teacher I Never Had, which Yash Raj Films acquired the rights to, with Cohen himself also giving advice during the film’s production.

Hichki stars Rani Mukerji in the lead role of an aspiring teacher having Tourette syndrome, who must prove herself by educating a group of underprivileged students. The film’s trailer was launched on December 19, 2017, And Rani Mukerji received her 9th Nomination for Filmfare Award for Best Actress at 64th Filmfare Awards. It was theatrically released on 23 March 2018 to generally positive reviews from critics. Hichki was also screened at the Shanghai International Film Festival on June 16, 2018.