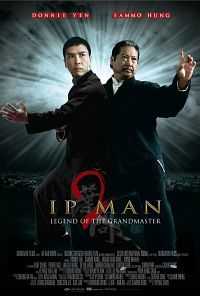 Wing Chun master Ip Man and his family move to Hong Kong in 1949 after their escape from Japanese-occupied Foshan. In 1950, Ip desires to open a school to propagate his art, as well as make a living during the difficult times, but he struggles to attract students due to his lack of reputation in the city. One day, a young man named Wong Shun Leung appears and promptly challenges Ip to a fight, but is easily defeated. A humiliated Wong leaves, only to return later with some friends to gang up on him; Ip easily beats them as well. Stunned and impressed by Ip’s skills, Wong and his friends become Ip’s first students, bringing more disciples to help the school thrive.

Wong is later confronted by some Hung Ga students while posting promotional posters for Ip’s school. One of them, Kei, challenges Wong to a fight and loses, but his friends take Wong hostage in revenge and demand a ransom from Ip. Ip goes to the local wet market as directed, but the meeting ends in a confrontation with a growing mob of Hung Ga students. Fighting their way outside, an outnumbered Ip and Wong are rescued by Jin Shanzhao, a martial artist, former bandit, and once rival of Ip, who comes to their aid with his own gang.