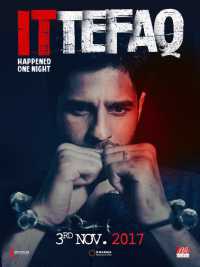 Vikram (Sidharth Malhotra) is an acclaimed British writer and NRI. On the night of the launch of his second book in Mumbai, he returns to his hotel to find his wife, Catherine, dead and calls the police. After the police arrives at his place, he evades them and speeds away in his car. While the cops are giving him a chase, his car overturns. He manages to escape with minor injuries and attempts to take shelter in a nearby apartment. Later that night, Maya (Sonakshi Sinha), a young homemaker who resides in the same apartment, spots a police car outside and rushes to it for help. Ittefaq (English: Coincidence) is an 2017 Indian thriller film, directed by Abhay Chopra and produced by Red Chillies Entertainment and Dharma Productions. The film is inspired from the 1969 film by the same name, directed by Yash Chopra. It stars Sidharth Malhotra, Akshaye Khanna and Sonakshi Sinha in lead roles.