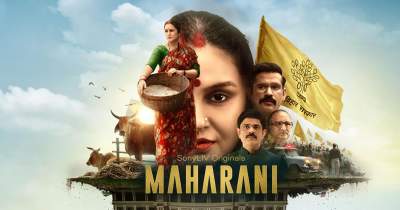 Maharani Review: A passable account of a state fighting steady decline and seeking regeneration, and of an undervalued woman waging her own personal war.

A woman’s perilous, arduous journey through the minefield of late 1990s Bihar politics is at the core of Maharani, a new ten-episode SonyLIV series. It could well have been titled Scam 1998 because that is what a large part of the show is about – a major corruption case that threatens to bring down a government.

Inspired by actual events, if not historically real people, the slow-burning, intermittently intriguing political drama, scripted by show creator Subhash Kapoor and Nandan Singh with dialogues by Umashankar Singh, benefits immensely from a slew of unwaveringly effective performances by a Huma Qureshi-led cast that is up to the challenge of plugging the gaps that abound in a tale of ambition, betrayal and blood feuds.

The insights are often perfunctory, the writing patchy, and the spotlight on the workings of democracy rather uneven. Yet, Maharani, riding on a dense plot that derives its twists and turns from newspaper headlines of a couple of decades ago, is a passable account of a state fighting steady decline and seeking regeneration, and of an undervalued woman waging her own personal war.