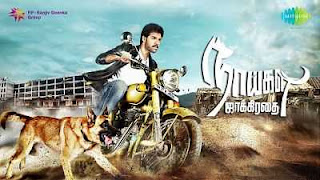 A gang has kidnapped a girl and several police officers, including Karthik (Sibiraj), who is attempting to rescue her. During a shootout, one man from the gang and a police officer named Arul Das (Raghav Umasrinivasan), who is a good friend of Karthik, are killed, while Karthik gets injured. He is put out of action and suffers from posttraumatic stress disorder.

Subramani (Idoh) is a trained military dog who has the potential to nab culprits and decipher crime scenes. After its owner, an army officer, is shot dead, Subramani is returned to the officer’s father in Coimbatore, who is a neighbor of Karthik. The neighbor leaves the town and requests Karthik to provide shelter to Subramani during his absence. Karthik denies the request but provides shelter after seeing Subramani being troubled by the small kids in the neighborhood. Karthik learns about Subramani and becomes good friends with him.

Meanwhile, Karthik’s wife Renuka (Arundhati) is abducted by Anbu Das (Balaji Venugopal), the head of the kidnapping ring, and is buried alive inside a coffin. A web camera is attached into the coffin, and the live stream is provided to Karthik. Karthik learns that Renuka can breathe for about six hours. Renuka speaks to Anbu, and with the help of a deaf and dumb teacher, Karthik deciphers what Renuka had conveyed. Suddenly, water trickles into the coffin, and Karthik concludes that it has to be rainwater. He, Subramani, and his cop friend travel to Ooty, the only place in Tamil Nadu where it was raining at the moment.