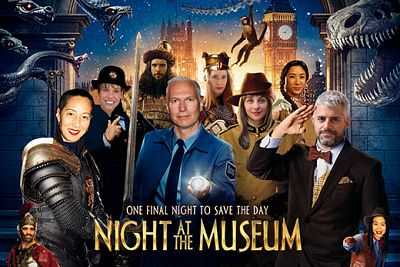 Larry Daley is a Brooklyn divorcee whose unstable work history causes his ex-wife Erica to believe that he is a bad example to their ten-year-old elementary school-aged son Nick (who plays junior hockey), and Larry fears that Nick respects his future stepfather Don more than him. Cecil Fredricks, an elderly security guard about to retire from the American Museum of Natural History, hires Larry despite his unpromising résumé. The museum, which is rapidly losing money, plans to replace Cecil and his two colleagues Gus and Reginald with one guard. Cecil gives Larry an instruction booklet on how to handle museum security, advises Larry to leave some lights on that night, and warns him not to let anything “in… or out”.

Once night falls, Larry discovers that the exhibits come to life, including a playful Tyrannosaurus skeleton nicknamed “Rexy” who behaves like a dog; a mischievous stuffed capuchin monkey named Dexter who develops a habit of stealing his keys; various other African animals; rival miniature civilizations portraying the Old West, Ancient Rome, and Ancient Maya; an Easter Island Moai obsessed with chewing gum; and wax models of various historical figures, including the violent Attila the Hun who desires to tear the limbs off his victims; four pyromaniacal Neanderthals; Sacagawea, who is locked in a glass case unlike the other exhibits; and Teddy Roosevelt, who rescues Larry from the miniature leaders Jedediah and Octavius, from the Old West and Roman dioramas respectively.

Teddy explains that since an ancient Egyptian artifact — the Golden Tablet of Pharaoh Ahkmenrah — came to the museum in 1952, for the last 54 years all of the exhibits have come to life each night. If the exhibits are outside the museum when the sun rises, they turn to dust. Teddy helps Larry by restoring order, but only for one night. In the process, Larry finds out that Teddy has a crush on Sacagawea, but without the confidence to go talk to her through her glass display.