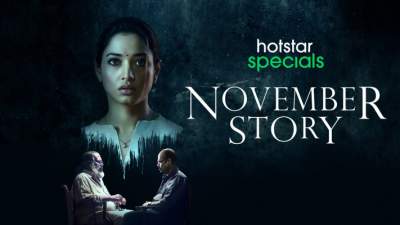 November Story is a significant improvement compared to the current Tamil daily soaps on television. But by the standards of web series, the Tamannaah starrer is a colossal disappointment.

In the fifth episode of November Story, an inspector, played by Aruldoss, gathers all his subordinates in a room at the station. He has traded his uniform for a more comfortable lungi and a shirt. He asks his fellow officers to get ready for a long haul. “You cannot excuse yourself from the room for any reason (even if it means you don’t get home for the next two days),” says the inspector. He has gathered everyone inside a room hoping to crack a very complicated case that has become a nightmare for the police department.

His investigative method suggests that he is not a great believer in actual police work. Instead of basing his investigation on clues, evidence and witnesses, his go-to strategy to crack a case seems to be to lock himself up in a room with his colleagues and stay there until someone comes up with an acceptable theory.

The scene resembles less a police procedural and more writer’s room of a television show or web series. It sort of gives us a sneak peek of how the creator of November Story might have squeezed the fellow writers on his payroll to get acceptable ideas for the crime series. Once he had the interesting ideas, the creator must have hammered them out and turned them into multiple stretches of riveting narratives. However, like the inspector’s investigation, the writing of November Story also feels superficial and forced.