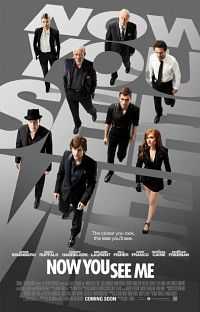 Story: ‘Four Horsemen’, a team of elite illusionists pull off heists for real during their spectacular shows. How do they do it? Is it indeed ‘magic’? Who’s pulling the strings and why?

Movie Review: The convoluted case is assigned to FBI agent Dylan Rhodes (Mark Ruffalo) and French Interpol officer Alma Dray (Mélanie Laurent). Post the robberies, the gang leaves no trace. They don’t steal for themselves. Their misleading actions and ambiguous motives drive Rhodes to the edge. Adding to the chaos is former magician Thaddeus Bradley (Morgan Freeman) who thinks he knows it all.

The film has a novel and promising premise. The gang’s cat and mouse game with the FBI, their display of magic tricks, fluid stunt scenes and Mark Ruffalo’s banter with co-cop Mélanie Laurent keep you engaged. The film works as a crime-thriller.

However, it’s unconvincing when it comes to dissecting the magic. As the film progresses, the antics of the law-defying ‘famous four’ start defying logic as well. The scattered plot runs out of steam eventually. The film goes into a different tangent altogether in order to be unpredictable, leaving you more perplexed than pleased.

Scene after scene, in order to not let you dig into the script too closely, the filmmaker adds too many plot twists, but that does not camouflage the loose ends.

The presence of a talented cast barely holds here as the characters are thinly sketched. Jesse Eisenberg yet again plays a fast-talking-shrewd guy with negative undertones like he did in The Social Network. And what is Michael Caine doing here?