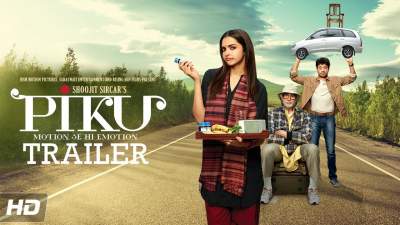 Piku offers no masala or romantic escapades but neither does it bog you down with preachy monologues. This is a film which works on performances of Amitabh Bachchan, Deepika Padukone and Irrfan Khan and Shoojit Sircar’s nuanced direction. This is the kind of entertainers Bollywood should aim at.

A father who introduces his 30-year-old daughter to her suitors as a “financially, emotionally and sexually independent, non-virgin woman” and a daughter who scolds her dad for his obsession with health and tells him it would have been better if he had some disease.

Deepika Padukone proves yet again that she is perhaps one of the most dedicated lead actors the industry can boast of and one who does not disappoint with her bold choice of non-glamorous, refreshing roles. Her attitude in the film will in remind you of all your women friends who are independent, have a mind of their own and do not allow anyone to dictate their lives (that is, if you are not one yourself).

Amitabh Bachchan is endearing and real in his portrayal of a 70-year-old man, dependant on his daughter. However, in his bid to come across as the ageing man who turns progressively childish in his demeanour, Amitabh does sound a lot like Auro (his character from Paa).