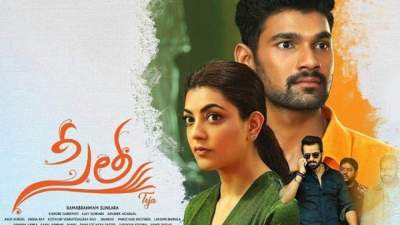 A four-year-old boy named Raghuram is left in a monastery by Anand Mohan and is promised that Sita will come to take care of him. Anand makes Ram promise that he too will take care of Sita in return.

Years later, V. Sita Mahalakshmi is an ambitious and successful, yet arrogant and selfish businesswoman, who manipulates people for her own gain. One day, she meets MLA Basavaraju to help her in evacuating a slum from the land she purchased to build a mall. In return, Basava asks Sita to marry him (though he is already married), which she declines. He then asks her to be in a live-in relationship for a month, to which she agrees and signs a contract. The slum is removed from the land and Sita parties with her staff, where Basava arrives, but she refuses to honor the deal. Irritated by her behavior, Basava starts putting business pressure on Sita by bribing or intimidating the officers into stopping the mall she is working on and threatening the man who gave Rs. Twenty-five crores to Sita for her business development to make her repay the loan immediately.

During this time, Sita comes to know that her estranged father Anand has passed away, so she plans to inherit ₹50 billion worth of property owned by him to pay off the loan. The lawyer reveals that Anand left only a mangalsutra in her name, and she is shocked upon knowing that the property was transferred to a person named Ram, who stays in Bhutan. With her friend Chakram and PA Rupa, Sita travels to Bhutan and meets Ram, who is eagerly waiting for her. Ram is very intelligent, but a kid at heart and always remembers the promise that he made to his uncle that he must take care of Sita, and she will take care of him. He always wears two watches in which one shows his heartbeat, wanting everything to be as per the timing. Sita threatens Ram to give her property back, and in a helpless situation, she asks him to come with her without informing the monastery.