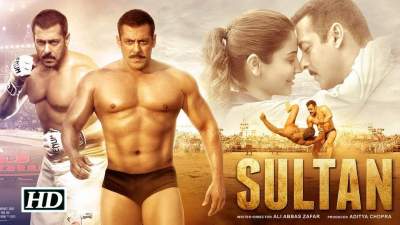 Aakash Oberoi (Amit Sadh), a young entrepreneur, is on the verge of a breakdown because his idea of bringing Mixed Martial Arts contests to India isn’t working out. His father advises him to rope in a local fighter, apparently because nobody thirsts more for victory than a “common Indian”.

The old man then suggests a name: Sultan Ali Khan.

Sultan (Salman Khan), a 40-year-old former wrestler, has seen the highs and lows of life. Going into flashback, we are introduced to Sultan’s younger self at a time when nobody could beat him in a sprint. A chance meeting with Aarfa (Anushka Sharma), an ambitious wrestler eyeing the Olympic gold, ignites a fiery passion in Sultan’s life.

But then, if Bollywood has taught us anything, we know Sultan isn’t going to come upon his happy ending that easily.

Today, Sultan is just a shadow of his former self. Life has been knocking him down for years, but he has always known how to fight back. He knows he is down, but not out.