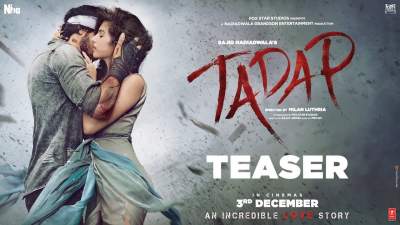 Ishana (Ahan Shetty) lives in Mussoorie together with his followed father who is addressed via every body as Daddy. Daddy (Saurabh Shukla) is a near aide of Damodar Nautiyal (Kumud Mishra), a baby-kisser who is preventing the kingdom elections. Ishana runs a theatre and enables Daddy and Damodar in political sports.

On the day of vote counting, Damodar’s daughter Ramisa (Tara Sutaria) returns from the United Kingdom in which she is studying. Damodar wins the elections and when Ishana is celebrating the former’s victory, Ramisa spots him. She gets drawn to him. Soon, she befriends him and even confesses that she is drawn to him. They quickly fall for every other and their courting will become intimate.

One day, she tells him that Damodar is making plans to get her married. She assures Ishana that she can convince her father to alternate his mind and that they ought to not meet for some days. She kisses and leaves him and at that genuine moment, Damodar sees them. He and Ramisa’s grandmother determine to split the lovers and educate Ishana a lesson.