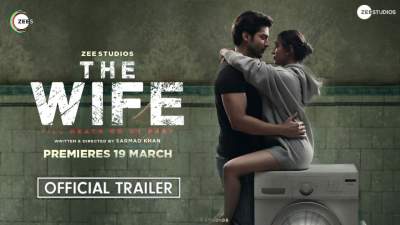 Zee5’s horror film, The Wife, is all set for a release on March 19. Directed by debutant Sarmad Khan, the film marks actor Gurmeet Chaudhary’s first solo film as a hero.

In the film, Gurmeet and Sayani Datta play a married couple, who move into a new apartment, only to come across a malevolent spirit.

“This is my first solo lead and you’ll get to see me in a whole new and different avatar. The script is so fresh; the movie is the perfect amalgamation of spine-chilling horror, action, romance, drama,” says Gurmeet. “Most horror stories tragically are quite predictable, especially for those who love this genre. Yet, with this film, you can’t know anything for sure till you’ve arrived at the end of it,” adds Gurmeet.

Speaking about his debut film, director Sarmad Khan says, “What makes The Wife unique is its urban setting and its matter-of-fact approach in presenting supernatural events.” He adds, “I am a huge fan of the horror genre and to be able to make my debut with one is the most exciting feeling ever. The entire experience has been a very fulfilling one indeed.”