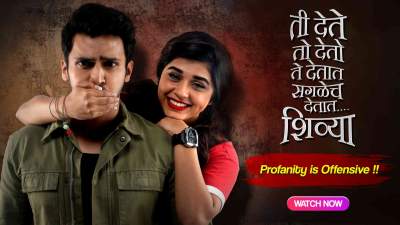 Formulaic movies revolving round a speeding hero, lovely heroine from conservative family, and a villain have been carried out to demise. Such subjects have been recurring in Hindi cinema of the Nineteen Eighties and Nineties. But there may be no damage in trying the formulation again, furnished it’s far achieved with conviction and a good supply of entertainment.

Shivya, which translates to curses, revolves around Raghav (Bhushan Pradhan). He is an sincere, fearless youngster from an urban top-center-magnificence circle of relatives. He owns a garage wherein he regularly has to tolerate hooligans. It is because of his good qualities that Sharvari (Sanskruti Balgude) falls in love with him and wants to marry him.

But Raghav has a horrific dependancy of cussing. He had picked it up as a toddler from his father (Vidyadhar Joshi). Despite being at the receiving give up from his parents and Sharvari, he is not able to govern his tongue. All hell breaks loose when his horrific dependancy makes Sharvari’s parents reject him as their son-in-law. To make topics worse, he gets involved in a tussle with a ruffian (Piyush Ranade) who doesn’t show his actual aspect frequently. Raghav has no concept that the man turns into the most important thorn in his direction.