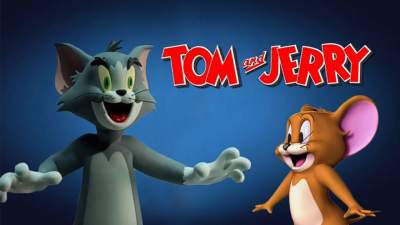 Tom & Jerry (released in some international markets as Tom & Jerry: The Movie) is a 2021 American live-action/computer-animated slapstick comedy film based on the cartoon characters and animated theatrical short film series of the same name created by William Hanna and Joseph Barbera, produced by the Warner Animation Group and distributed by Warner Bros. Pictures. The film is directed (and produced as an executive) by Tim Story and written by Kevin Costello. It stars Chloë Grace Moretz, Michael Peña, Colin Jost, Rob Delaney, and Ken Jeong in live-action roles. Nicky Jam, Bobby Cannavale, and Lil Rel Howery also feature in voice roles, with the titular characters are voiced by William Hanna, Mel Blanc and June Foray, via archival recordings, alongside Frank Welker. The film’s story follows Jerry taking up residence in a fancy hotel in New York City with Tom being hired to keep him from ruining an important wedding, until they have to put their differences aside to face against a staffer antagonizing the two.