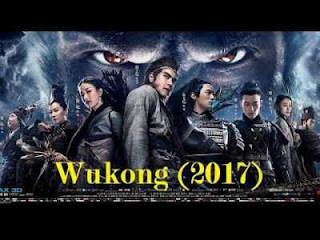 If, judging by the trailers, the summer’s great female assassin film will not be Atomic Blonde, but Jung Byung-gil’s The Villainess, I know from having just seen it that so far the summer’s great action film isDerek Kwok’s Wu Kong with its repeated tagline

My name will be remembered a million years, Sun Wu Kong.” A slight exaggeration there, but it has been a thousand years that the legend of the Sun, the Monkey King, has been around.

Our superhero’s quest is audacious enough. For a long time, the gods have ruled the fate of the earth, so … heaven must be torn down.

There is a set of superheroes on hand, including Shawn Yue, broken-hearted because he fell in love with a mortal, who somehow found herself in heaven. Once she is sent back to earth, she forgets everything that happened above the clouds.

Then there’s the reigning goddess’s errant daughter, Ni Ni, who falls for Wu Kong, even loving him when he reveals his true colors or, rather, fur and becomes a monkey.

The plot has the populist elements so common in Korean films of late, such as Bong Joon-ho’s The Host, in which a sea monster can’t be defeated by the forces of the bumbling, but sinisterly police state, but is laid low by a collection of street sellers and homeless people.